Airbnb vs. Hotel vs. Hostel: What’s Best for Budget Travel?

Airbnb vs. Hotel vs. Hostel: What’s Best for Budget Travel? 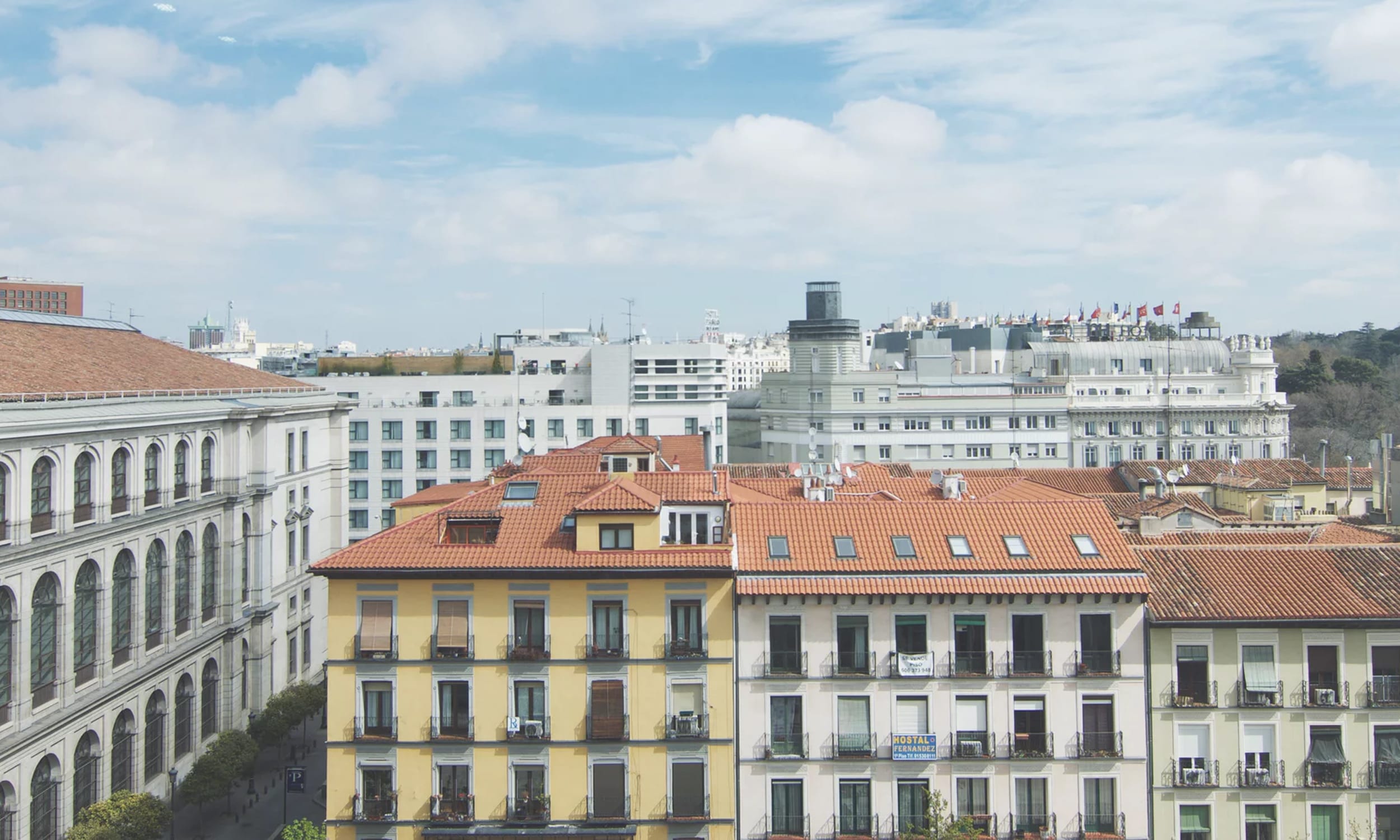 What type of accommodation should you choose while traveling on a budget? Generally, a hostel is still your most budget-friendly option — but not always.

Finding affordable accommodation while traveling on a tight budget is hard, but not impossible. The fall after graduating college, I spent six weeks backpacking and couchsurfing in Europe. At one point I wanted to “splurge” on a hostel. I was shocked at the price — $70 for a bed in a dorm in Amsterdam? Despite their reputation, hostels aren’t always the most budget-friendly accommodations, especially in Europe. If you’re traveling as a part of a pair, an Airbnb or hotel can sometimes be the same price or cheaper.

So, where should you stay while traveling on a budget? An Airbnb, hostel, hotel, or something else entirely? To help you figure it out, I calculated, then compared, average prices across ten cities. Read on to see how Airbnbs vs. hostels vs. hotels compare in terms of price and amenities.

Airbnb vs. Hostel: What’s the Difference?

Hostels and Airbnbs are not the same. A hostel is like a hotel where you can rent a bed in a shared bedroom, instead of a private room (though some hostels have this option for a higher price). You usually get a shared kitchen and living space, which allows you to meet other travelers.

An Airbnb is more like a vacation rental. You can either rent a private room in a shared space or the entire place. If you rent the entire place, you will not share it with anyone else, though it might be on a property where the host lives (i.e. you’ve rented out a guest cabin). If you rent a private room, you may share the kitchen and living room with other travelers and/or your host. This can be a nice way to meet people who live in the city you’re visiting.

Which is Cheaper: Airbnb vs. Hostels vs. Hotels?

A dorm bed in a hostel tends to be the most affordable accommodation for a solo traveler. For those traveling in pairs or groups, Airbnbs are sometimes the most affordable option — especially if you stay in one place for a longer period of time (i.e. one week). Cleaning fees, which can be as low as $20 for a room in Athens or as high as $80 for a house in London, aren’t as bad when spread out over the course of seven days, but can blow your budget if you’re paying them every day or two.

In some cities, like Prague, Vienna, or Berlin a basic hotel isn’t too much more than a pair of dorm beds.

For all of the averages listed above, it’s possible to find accommodation below, or above, the average number quoted — especially if you’re willing to go for a smaller rental (like a studio) or stay somewhere less central.

Seasonality also impacts rates. While a room may cost $60 in January, that same exact room could rise to $115 in July. In general, I’d assume hostel beds will be about double in peak seasons (versus the average). Airbnb and hotel prices also rise.

To answer the question “what’s cheapest?” I looked at data across Airbnb (minus cleaning fees, since they vary widely) and the Global Hotel Price Index by hotels.com. For hostels, I filtered a list of hostels only on Hostelworld, then calculated the average of the first 20 results “dorms from” price to get the average of the cheapest available bed. A 4-bed female only dorm may cost more.

The cheapest place in London, England for two people is two beds in a hostel dorm.

The cheapest accommodation for two travelers in Athens is a hostel or Airbnb private room.

In Athens, Airbnb is pretty comparable to a hotel or hostel. A private room will run you only a little more than two beds in a shared dorm room, and an entire place is on par with a 2-star hotel (and likely more stylish). Airbnb is definitely your best choice if you’re staying for more than two nights and want a little more space to yourself.

The cheapest accommodation for two travelers in Prague is a hostel or budget hotel.

Prague is, all around, one of the cheaper destinations in Europe. If you’re on a tight budget, stay awhile. Have a $1 beer night every night!

As for places to stay, two beds in a dorm room are, yet again, the least expensive. Hotels are also affordable, though most 2- and 3- star hotels in Prague will be pretty basic. If style is a concern, you’ll have better luck looking for a well-designed hostel than a hotel at that price range.

The cheapest accommodation for two travelers in Vienna is a hostel or Airbnb.

Hostels, again, beat out other accommodations as cheapest in Vienna, Austria. However, a private room in an Airbnb will be less expensive than a private room at a hostel, and you’ll also have more flexibility around which part of the city you stay in. Often, it’s possible to find Airbnbs in neighborhoods where there are no hostels, like Innere Stadt, Vienna’s old town.

The cheapest accommodation for two travelers in Berlin is an Airbnb.

Berlin is a bit of an anomaly: the average price of a private room on Airbnb is just slightly cheaper than two dorm beds in a hostel. On the other end, a room at a 3-star hotel is pretty comparable to renting out an entire apartment on Airbnb. In the off season, you can also easily find a good hotel for ~$50 per night.

The cheapest accommodation for two travelers in Amsterdam is a hostel dorm.

Compared to other cities on this list, a place to stay in Amsterdam — no matter if it’s a hostel, hotel, or an Airbnb — won’t be cheap. Two beds in a hostel dorm are the most economical. If you want privacy a private room on Airbnb will be cheaper than a private room in a hostel or a hotel.

Also, remember that $70 bunk bed I mentioned earlier? (I’m looking at you, Generator Amsterdam). Yeah, those happen during peak seasons, which includes April through mid-May, when tourists flock to the city to see the tulip blooms. A bed in a dorm can be as much as $130 per person per night . Ouch!

The cheapest accommodation for two travelers in Barcelona is a hostel dorm or Airbnb.

Spain has a reputation of being a more budget-friendly destination among Western European countries, which makes the steep hotel prices in Barcelona a bit surprising. They’re not too far off from Amsterdam and, on average, more expensive than a room in Paris (dare I ask: is Barcelona the new Paris?).

For two people, two beds in a hostel will be the least expensive option. For more privacy, a private room on Airbnb isn’t too much more. Not listed, however, are Spanish Pensiones. These small, family-run inns are often basic but much more affordable than a hotel in Spain.

The cheapest accommodation for two travelers in Rome is a hostel dorm.

Rome may be romantic, but if you’re on a budget, your Roman digs may not be. Two beds in a dorm are the most affordable.

If hostels aren’t your thing, an Airbnb — even if you’re renting the whole place — will be cheaper than a hotel. Like Spain, Italy also has many pensiones worth considering.

In the summer months, when prices spike and availability becomes sparse, it’s also worth looking at University Booking, which offers dorm rooms to travelers when school’s out of session. There are several major universities in Rome that participate. Expect to pay about $80 for two people in peak season.

The cheapest accommodation for two travelers in Paris is a private room on Airbnb.

Surprise, surprise: in Paris, a private room in an Airbnb would actually be more affordable than two beds in a hostel. Overall, Airbnbs are more affordable than hotels in Paris and can be a great way to cut down costs in this otherwise spendy city. So go ahead, buy a baguette every evening on your way home and live like un vrai Parisien.

The cheapest accommodation for two travelers in Stockholm is a private room on Airbnb.

For two people staying in Stockholm, a private room on Airbnb will be cheaper than a hostel. Then again, Stockholm is also home to one of the more unique hostels in Europe: the Jumbo Hostel, built in a refurbished airplane. And, though a less than budget-friendly $150 per night, I’m pretty obsessed with Stallmästaregården.

If you want to be ultra-budget, Sweden allows people to camp for free anywhere in the country (“just, you know, don’t camp in someone’s garden without their permission,” advised one Swede). In Stockholm, it’s not possible; but if you venture out to the Swedish Archipelago, consider free camping or staying on a campground.

Is an Airbnb Cheaper than a Hostel?

For solo travelers, a single bed in a hostel dorm is cheaper than an Airbnb. If there are no hostels in the area, a private room in an Airbnb is the next cheapest accommodation option.

For those traveling in a pair or group, an Airbnb is often, though not always, cheaper than a hostel and also allows you more privacy than a shared dorm room.

How to Save Money on Airbnbs and Hostels

Regardless of where you’re going, use these tips to save money on your accommodations:

Best Luggage for Hostels and Airbnbs

When staying at hostels and Airbnbs, a travel backpack is better than wheeled luggage. This is especially true in Europe where elevators aren’t as common in hotels and apartments. That Airbnb may very well be a fifth floor walk up in Marseilles.

Hostels are sometimes a bit off the beaten track and wheeled luggage will be a continual frustration. A travel backpack gives you the freedom to explore. Here’s what to pack for a hostel.

Looking for a fully-featured bag with high-level organization? The Outbreaker Backpack has it all.

Made from waterproof sailcloth and a fully adjustable harness system on the outside, with obsessive organization on the inside, carry as much as you want, comfortably, in this bag. Front loading, like a suitcase, with a sleek look, this bag enhances your travel and makes packing a joy.

Where should you stay in Europe on a budget? Generally, a hostel is still your most budget-friendly option — but not always.

In some cities, like Paris, Berlin, and Stockholm, a private room on Airbnb will actually be cheaper. Other times, an Airbnb is roughly the same as a hotel, which is true in Berlin, Vienna, Athens, and Prague. In Amsterdam and Rome an Airbnb will be cheaper than a hotel. It definitely depends!

Remember: cost isn’t everything. If you’re more interested in meeting a local, choose a private room in an Airbnb. Looking to socialize with other travelers? Live up the hostel life. Would you rather be left alone with you significant other? Go for a hotel or entire house on Airbnb. 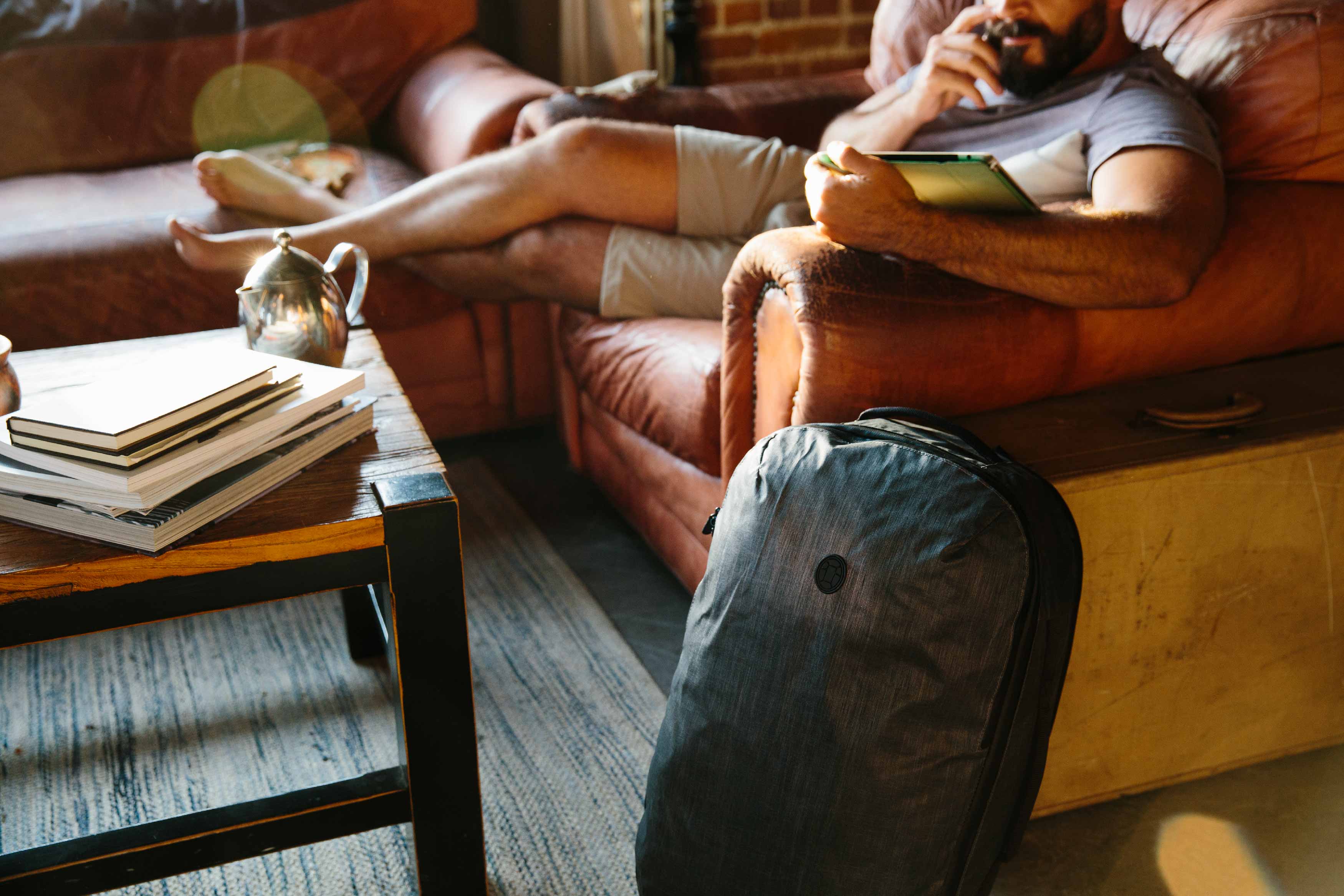 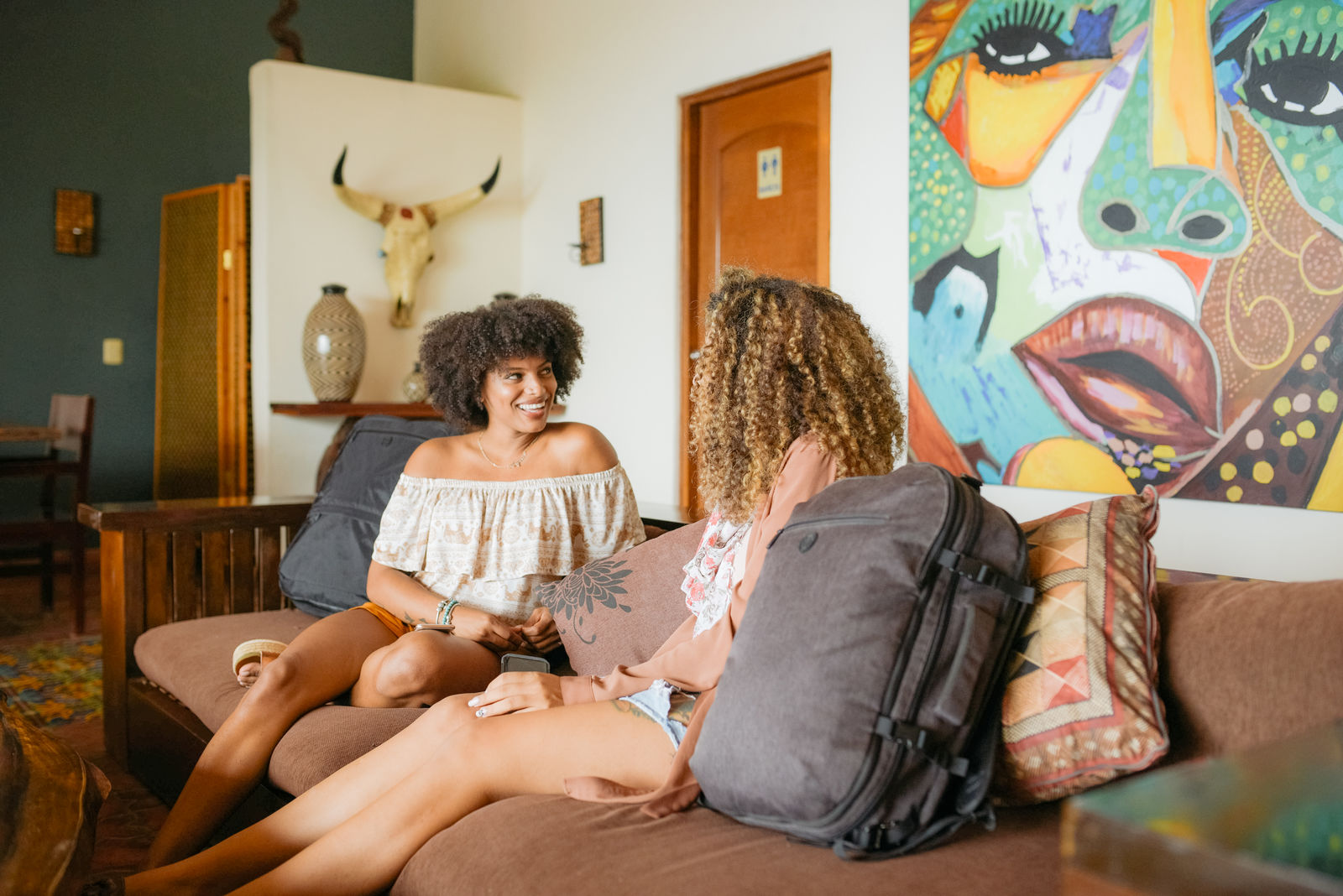