If you’re traveling to China, expect a few hiccups.

Not just in the language department; Mandarin is consistently rated as one of the hardest languages for native English speakers to learn.

I’m talking about hiccups in accessing the internet while you’re traveling in China. You won’t be able to simply type in Facebook.com and voila, there’s Facebook.

Oh no, if you navigate to those sites that like you’d normally do at home, expect a big fat “Page blocked” error. Except that error is displayed in Mandarin and you won’t have a clue as to what it says.

And no matter how hard you hit your device or laptop — the well-known ultimate way to solve any technology meltdown — it won’t make a difference.

What’s the Deal with China’s Internet?

The Chinese government has enacted several pieces of legislation and projects designed to censor internet usage in China. More than 60 internet regulations have been created by the Chinese government, specifically to block people in China from using social networks like Facebook, Twitter, Instagram, and YouTube, to name a few.

This censorship is part of a large crackdown on free speech and social liberties. This large crackdown is called the Golden Shield Project and it’s been around for two decades. When the internet arrived in China in January 1996, the Chinese government began blocking foreign websites by August 1996.

That censorship hasn’t stopped or slowed down since then.

In 1997, Wired magazine coined the term “the Great Firewall” and it’s stuck ever since.

What the Great Firewall Means to Travelers 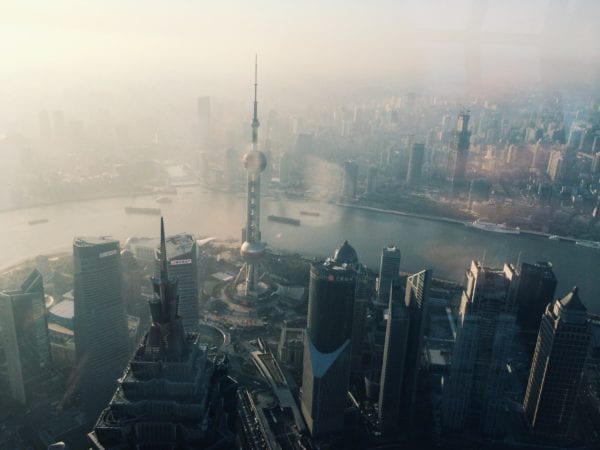 If you use Facebook to document your travels, you’ll want to explore another way to access it when you’re in China.

If you use Google — like Gmail, search, or Drive — you’ll want to find another way to get connected to your email.

These sites are blocked. If you’re accessing the Internet in standard fashion while in China, you can’t surf these sites.

How to Bypass the Great Firewall

The good news is that you can circumvent the internet blockage and access your email while in China to connect with the folks back home.

Wait, I take that back. You can circumvent this censorship until the Chinese government — which is fully aware of the loopholes used to bypass it — decides to sew up those loopholes.

Our intrepid co-founder, Fred, travels to China frequently to make our awesome Tortuga backpacks. (I’m not biased… nope, not at all.)

How does he connect with unrestricted internet while in China?

“I’ve had the worst luck with SIM cards in China. At Guangzhou airport, I’ve bought the same card from the same (only) vendor at least twice. Despite paying more than you would in most other countries, my data allotment would mysteriously run out in 2-3 days. Then I’d get a text in Mandarin and head to 7-11 to re-up with more data just to make it through the week.

My biannual China trips were a big motivator in my switching to T-Mobile two years ago. Now, when my flight lands, or my train arrives, or my car crosses the border from Hong Kong, my data just works. Well, mostly works.

My 3G data can be spotty, even in the metropolis of Shenzhen, but this solution is the best one I’ve found so far.

Connecting to a VPN like Astrill will slow your connection down even more. But here’s the surprising part: I’ve been able to evade China Great Firewall even without a VPN.

I’ll warn you that this isn’t a perfect, consistent solution to accessing blocked websites, but you won’t need a VPN nearly as often as you would with a local Chinese SIM card.”

Matt Kepnes of Nomadic Matt agrees, “Using T-Mobile phones in China gets you around the Great Firewall. I was able to use Facebook, Twitter, and Instagram without a problem.”

Maybe you’re thinking, okay, great, but what about T-Mobile’s service at home and all those other countries I travel to? I’ve heard many nasty things about dropped calls and black-out spots regarding T-Mobile’s coverage.

Becky of The Girl and Globe has been a T-Mobile user for 18+ months. She has tested T-Mobile’s service all over the USA, Central America, Europe, the Middle East and Asia.

Her verdict on T-Mobile?

“T-Mobile has a fantastic network in urban areas which quickly degrades in low-population areas. If you’re the type of traveler who likes to visit small towns and national parks, you may have trouble. I don’t have service on parts of the Virginia I-95 corridor (despite being a major highway) and it can be hit-or-miss as soon as you hit suburban outskirts.

T-Mobile coverage has improved in the USA over the past year, but it’s not perfect. That said, T-Mobile is still a great choice for travelers.”

Matt seconds her opinion: “If you are a traveler and live in the US, you should 100% get T-Mobile. Your life will be a lot easier, you’ll be able to keep the same number, and you’ll stay connected around the world. (And your bill will be a lot cheaper.)”

What’s a VPN? It’s a secure, personal portal to the Internet. Think of it like a personal Uber car rather than taking the shuttle with 30 other people to the airport.

“I am using Astrill VPN, but there are plenty of them. Express VPN is also pretty popular among expats.

Recently, I bought a VPN router for my home. With this router, I can have up to 20 devices connected to it and works with Google and other useful websites. There was a time, when I had just arrived in China, when I didn’t care so much about using these websites.

But now that I’ve lived here for five years and counting, it’s important for me. First of all, for my remote work. Secondly, to be in touch with the rest of the world and know about what’s going on in places that are not China.”

Buy a VPN before you arrive in China. VPNs are much harder to find within the country.

When you’re deciding which VPN to buy, opt for a paid service rather than a free one.

“Free ones can easily be blocked by the censorship,” says Giulia.

StartUp Living in China did a side-by-side VPN comparison of ExpressVPN, VyprVPN, and Astrill. After analyzing speed, reliability, bandwidth, and server availability, they picked ExpressVPN as their #1 choice.

“It is a bit pricey compared to some other VPN apps, but ExpressVPN’s stellar customer support and 30-day trial period makes it more than worth it. The desktop and mobile apps are the fastest we’ve seen, reliable, with plenty of server choices. Highly recommended.”

Express VPN’s optimized servers are one of the features that StartUp Living in China liked most. Plus, the software’s simple and dedicated desktop and mobile apps. Typically, the author can get 7 mbps on desktop — a decently fast connection.

If you decided not to get a Chinese SIM card (or you don’t have T-Mobile), you’ll need data and ability to browse the Internet. A pocket WiFi is your solution.

Here are your options for pocket WiFi:

Beware that a pocket WiFi doesn’t solve the problem of accessing Google or Facebook. You’ll still need to spring for a VPN add-on to access the social (and non-social) websites that the Chinese government doesn’t want you to browse.

Instead of renting a pocket WiFi, you can buy a local SIM card and insert it into an unlocked smartphone for internet in China as a tourist. Due to the language barrier, this option can be difficult.

When Roman Loyola from MacWorld went to Beijing, he bought a SIM card from China Unicom for his old iPhone. Rather than bumbling through the set-up on his own, he persuaded the store clerks to set up his iPhone for him.

Once his data plan on the SIM card was activated, he accessed his VPN and connected to Facebook, Twitter and the rest of the “illegal” gang.

“While I was using a VPN, I noticed a network lag of 4 or 5 seconds, but it never got worse than that. I was in Beijing for four days, and I never had a VPN problem. I was surprised to find that the signal strength at the (physical) Great Wall of China was very good, and I successfully posted Instagram pictures from there.”

Stay connected with the rest of the world (and your Gmail) with a bypass of China’s Great Firewall of internet.

The four best options are:

Have you spent time traveling in China? What was your experience with the Great Firewall? Are there any secrets that we don’t know yet? Please share!