I’ll cut to the chase: my trip to the Sundance Film Festival in Park City, Utah, was one of the most fun trips I’ve ever been on, and it’s pretty easy to explain why. Aside from sleeping a tiny bit every night, I mainly did three things in Park City, all of which are among my favorite things in the universe to do. Watch movies, eat good food, and party in a great environment. Everyone, both locals and festival-goers, were friendly and in a great mood. And, aside from the festival, Park City is charming and gorgeous, and home to some of, if not the very, best skiing in the U.S.

I highly recommend the experience to anyone who has the faintest interest in movies. Contrary to popular conception, it can be a relatively affordable weekend trip. More on that in a bit. 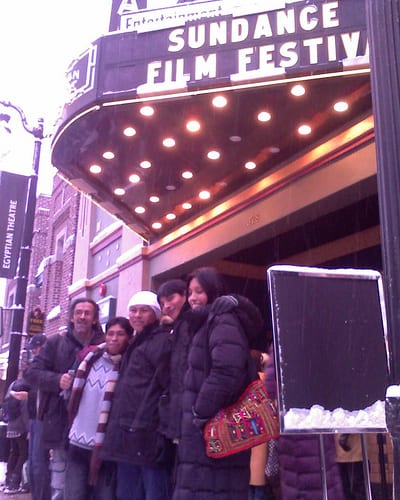 I will admit, though, that there’s one con working against the Sundance experience. Long lines, which one queues in while waiting for movie tickets not purchased in advance, can eat up several hours at a time and can occasionally end in bitter disappointment. The good news is, though, that if you buy your tickets in advance online or at the box office, purchase a festival pass, or only get in the wait list line for less-heralded films, then there’s almost no cause to stand in long lines.

There’s no need for you to read about what a great trip I took. But I think it may be helpful if I offered some advice for a first time Sundance-goer (as I was this year). I’ll do so in FAQ format. (Do let me know if you have any more questions! I’ll be happy to add to the list.)

You said going to the festival doesn’t necessarily have to be that expensive, but I’ve heard that it’s a pricey affair. How’d you pull off an affordable trip?

My suggestion is to stay in a condo that’s a few miles from Main Street (the main, and exceedingly lovely, hub of the festival and Park City) but near a shuttle stop (the shuttles run all day until 3 AM). If you share a three bedroom condo that’s booked well in advance with six people, it’s likely that your accommodations will be less than $50 a night. The other affordable option is a very nice local hostel called Chateau Apres. I talked to several other festival-goers who stayed there, and they had nothing but good things to say. It’s close to Main Street and costs about $50 per night during the festival (less during other times of the year).

Once you’re settled into your condo, go to the grocery store and buy some food. Food, aside from the Burger King, can be a bit pricey in Park City. Cooking one meal a day over the course of a four-day weekend will might very well save you $100.

One other option to make the trip more affordable is volunteering for the festival. The big benefit is free tickets and access to other festival events.

Is it really impossible to get tickets in advance?

No. Not even close.

I saw eight films in four days, and for only one of those films had I purchased tickets in advance.

My suggestion, which I recommend after having learned from a mistake, is to buy tickets for at least two films per day. This is a pretty easy way to avoid the wait lines, and it’s easy to do. Register to buy tickets on the Sundance website in the fall, and they’ll send you an email telling you when your window to buy advance tickets is. When that window opens up, hit their easy-to-use website and purchase tickets for anything that looks interesting to you. Leave at least two hours between shows in case you want to eat or get in a wait line for a film you don’t have tickets for, and also because Park City can be a bit slow to navigate through using the buses.

Also, and this is a great option for early birds, you can get to the Sundance box office at 8 AM every day to swoop up any available unsold tickets for that day’s show.

Probably the best and least talked about method for getting tickets to a show is scalping tickets at face value. Because there are so many movies playing all the time, festival-goers always have spare tickets. Ask around on any bus or in any restaurant, and you can probably find tickets for something. A few of my friends managed to get tickets for just about every film they wanted to see by scalping tickets at face value right outside the theater where the film was about to play. It’s easier than it seems.

Do I need to have a car in Park City for the festival?

Absolutely not. I’d recommend against using it, aside from maybe for running to the grocery store, even if you had one. Parking is very expensive during the festival, the streets are packed, and the buses around town are excellent.

If I want to get in a wait list line to get a ticket, how early should I arrive?

If you want to go see a very popular film that’s getting a lot of buzz, like this year’s Like Crazy, which I missed out on seeing, I’d suggest getting in line for the wait list as early as possible. Period. Three or four hours early is fine. The goal is to be in the first five people in line.

I don’t love movies. Is the festival still worthwhile?

In my very biased opinion, I’d say yes. Sundance has a bit of a spring break feel, but with an older crowd, to it. If you want to party and mingle in the snow, Park City will be a lot of fun for you. And almost everyone at least likes movies, so you’ll still probably have plenty of fun. And if you like winter sports, there’s definitely no better mix of action and social life.

I’m pretty sure I’m not going to get tickets after standing in line for all this damn time. Should I wait it out?

No! Jump ship, run away, abdicate.

The lesson is in sunk costs here. It’s just like in poker when you’ve already bet a lot but essentially know you’re beat — it’s time to fold.

There’s so much else to do at Sundance. Go hop in line for another wait list or scalp tickets at face value (which is easy). If the movie’s good enough, you’ll be able to see it in theaters or Netflix it soon enough.

My way of dealing with the wasted time of not getting a ticket after standing in the wait list line is to remember that if you were at home you’d likely be sitting in front of a computer surfing the net or on a couch watching TV. No big loss.

How do I get to Park City?

I flew to Salt Lake City from LAX on a cheap Southwest Airlines ticket then took a group shuttle to my condo. If you purchase well in advance, flying to Salt Lake should not be that hard or expensive.

Many of my friends drove from Los Angeles to Park City, which is less than a twelve hour drive. None of them seemed to have minded very much. If you’re going with a group, driving is probably the slightly cheaper option, and it’ll definitely be a fun memory and part of the experience.