Water gushed over my head. It battered my flimsy see-through rain jacket.

I was on the Maid of the Mists boat in the throat of Niagara Falls.

Her captain carefully steered us around the rollicking waves created by thousands of gallons of crashing water. Spray splattered our faces. I hung on for dear life and wished the boat would get closer so I could taste the power of Niagara Falls, feel its brutal force shake my bones, and feel insignificant in that iconic horseshoe waterfall.

Welcome to Canada. A foreign country sharing the northern border of the United States. A country where you could quickly feel transported to Europe, thanks to bilingual (French and English) signs and labels, speed limits posted in kilometers, and a lilting inflection of “eh” tacked on to the ends of sentences.

If you’ve never been to Eastern Canada, three cities are a great introduction to her charms; Niagara Falls, Toronto, and Montreal are destinations in their own rights, but are close enough to be strung together into a longer getaway. Fly into Toronto and hop the train from there. 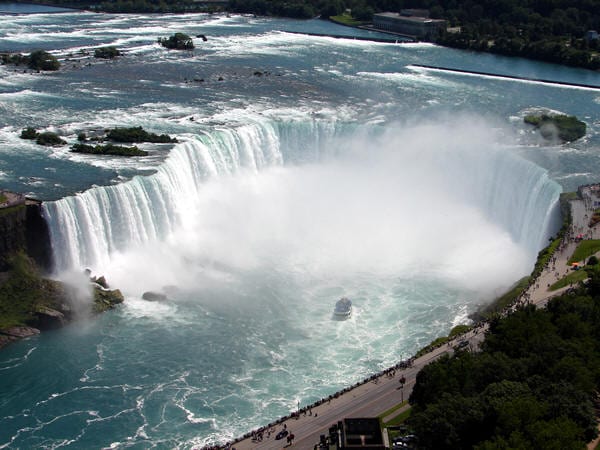 This city is split between two countries — the USA & Canada– by the Niagara River which crashes into Niagara Falls: three world-famous waterfalls arranged in a half-moon shape: (largest to smallest) Horseshoe Falls, American Falls, and Bridal Veil Falls.

With a vertical drop of 165+ feet and the highest flow rate of any waterfall in the world, Niagara Falls is an awe-inspiring force of nature. Akin to standing at the edge of the Grand Canyon, you get a sense of the big this world is, and the crazy forces working to create these huge gouges in the earth’s surface.

What makes this city special? One simple fact: from the Canadian side, you get the most spectacular views of the American and Horseshoe Falls — which are the two largest of the falls.

But the city of Niagara Falls is more than a refreshing face spritzer from a gigantic waterfall trio. Thanks to lower valued Canadian dollar and younger drinking age (19 years old vs. USA’s 21) this city thrives on tourism.

Marriott Niagara Falls Fallsview Hotel and Spa: (from $165/night) If your romantic night needs a guaranteed wow-factor, this is the hotel for you. It overlooks the jaw-dropping Niagara Falls. Ask for a  room on a higher floor to max out your view. The best part is that the falls are only a 5 minute walk from the hotel, so you can witness the thunder in person.

Niagara Grandview Manor: (from $158/night) Built in 1891, this historic inn has been welcoming guests since 1961. Adorned with crisp white balconies and fluffy pillows, this B&B promises deep sleep and grand adventures after filling your belly with a delicious cooked-to-order breakfast. And, did I mention the Falls are just a short walk away?

Maid of the Mist: Visiting Niagara Falls without riding a bucking boat into the mouth of the falls is like going to Paris and skipping the baguettes. For under $20, you’ll experience 600,000 gallons of water rushing over three enormous waterfalls. Imagine the true thrill of tipping over the edge of Horseshoe Falls in a wooden barrel like daredevils of yore to prove your manliness, or womanliness.

Niagara Parks Butterfly Conservatory: Over 2,000 colorful tropical butterflies from 45+ different species fill this rainforest-like conservatory. Take a  self-guided tour around the waterfall and pond to experience these delicate flying wonders. The conservatory is located on the grounds of the Niagara Parks Botanical Gardens (10 minutes north of the Falls).

Niagara Glen Nature Areas: “You will never experience anything like it. You can’t get closer to the rushing waters of Niagara anywhere else,” raved one TripAdvisor reviewer. Hmm, I’m intrigued. If you’re craving some alone time with nature, check out this gorge. Hiking trails, fishing, picnicking, or just sitting on a boulder to sun — all acceptable activities here. When hitting the trails, keep in mind the 200-foot elevation changes and rugged terrain.

Take a Winery Tour: Niagara is known as one of the premiere wine producing regions in Canada. While you’re there be sure to take a tour of one of the many wineries located nearby. Canada is known for the production of super sweet and unbelievably rich ice wine, made from grapes harvested after the first frost, increasing the sugar content of the fruit. And, yes, you drink it cold. Don’t miss it!

This city perches on the edge of great Lake Ontario. A popular international airport for hopping over to Europe from central United States — I once spent a solid four hours here drinking beer and eating poutine, waiting for my flight — Toronto promises more than just a stopover.

Toronto is Canada’s most populous city with a history dating back to before the War of 1812 when it was captured and plundered by US forces. You can’t miss the CN Tower: the tallest free-standing structure in the Western Hemisphere. Be sure to check out Distillery District and its largest collection of Victoria-era industrial architecture in North America.

Shangri-La Hotel: (from $330/night) This luxury hotel in central downtown Toronto was a Trip Advisor Traveler’s Choice 2016 Winner. Enjoy the matchless concierge service, upscale touches (a TV in the bathroom mirror) and some of the largest hotel rooms in Canada. My clincher: the complimentary breakfast.

Airbnb: (from $93/night) A charming downtown apartment in an historic building from the 1920s, this gem comes complete with a gorgeous dark wood trimmed staircase. In the apartment’s spacious kitchen, you can cook up your delicious finds from the farmer’s market and feel like a native in your dove-gray apartment rental.

CN Tower Edge Walk: Walk 360 degrees around Toronto’s tallest free-standing structure (356 meters above bone-shattering sidewalk)–after you sign a book-long waiver. Don’t worry, you’re strapped in to a harness as you take your stroll!

St. Lawrence Market: This is the best food market in the world as recognized by National Geographic. Since 1803, this open air market is where you can take your pick of shopping: antiques, food stalls, farmer’s market, and gallery.

Outdoor Shakespeare plays: Held in Toronto’s High Park, you’ll get fresh air and culture in one fell swoop. Call me an English geek, but I love soaking in Shakespeare in the great outdoors. This season features the ever-dramatic Hamlet and his dead daddy complex, and the comedic fairy-tale about love in All’s Well That Ends Well. 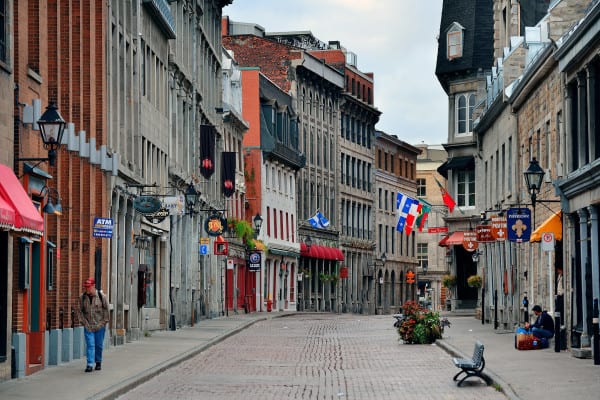 The second largest city in Canada, Montreal is in the province of Quebec, where French is the primary language; spoken at home by nearly 60% of its inhabitants. In Montreal you won’t find English printed first, or larger on any sign; in fact, you often won’t see it at all. Most of the inhabitants speak some English, so no need to panic, but it would be good manners to learn a little French before you go.

It is the only Canadian city to have hosted both a World’s Fair and the Olympics. Home to the Montreal Canadiens — an ice hockey team that has 26 Stanley Cups Championships under its belt– it’s a fantastic place to take in a game of the national sport in person.

For the architecture buffs, Montreal boasts many visually interesting buildings due to the city being Canada’s industrial and financial center for 150+ years. Among the notable features: the sprawling underground “city beneath the city,” the historic Vieux Port, and the ubiquitous spiral staircases as entrances to second story residences. Definitely check out Old Montreal’s grand and imposing City Hall during your trip to Canada this summer.

Montreal has something for everyone. From upscale boutique hotels, to all of the usual chains. The real charm of the city is found in the auberges, tiny inns, often remodeled homes, that are bed and breakfast style accommodation with a French twist. Often, these hidden gems have only four or five rooms available, and the best locations sell out quickly, particularly in summer.

Le Petit Hotel: (from $210/night) Just steps from Notre-Dame Basilica, this hotel is in charming Old Montreal. Also known as: where I’ll be staying on my next visit to Montreal because of the complimentary breakfast (free food always starts your day of adventures off happily). It’s  central location means it’s primed for exploring on foot.

Le Maison Pierre du Calvert: (from $185/night) This historic old mansion is decorated with furniture that looks to be stolen from an 18th century castle, it’s a B&B that will fuel your imagination. Yes, you get romantic four poster beds. And, yes, you also get modern, stylish bathrooms featuring running water. (No serving maids here.) Breakfast is definitely included and I’ve heard the waffles are a sure-thing.

Notre-Dame Basilica: Built in 1656, this is Montreal’s oldest church. It has the same striking dual towers that are found in Paris’ Notre Dame. With its arched ceilings and air of majesty, this stunning example of Gothic Revival architecture is not to be missed.

Mont Royal: Stroll through three adjacent peaks just east of downtown and enjoy the fantastic views of the city. As Montreal’s Central Park, its designer was the same man who crafted its American cousin: New York’s Central Park. At Lac des Castors, you can rent paddleboats in the summer.

Jean-Talon Market: This is, hands down, the best fresh market in Quebec. In the center of the market you’ll find everything from farm fresh produce to real truffles, and home spun honey, to fresh seafood on ice. Around the margins are hole in the wall cheese shops that echo Paris and ethnic food markets where even the hard to find items are common. Be sure to order a trio of conchitas pibil tacos from the vendor across from the Turkish bakery near the entrance. The family that is cooking behind the counter is from Mexico City and the food is legit. Wander at whim through the stalls of food, crafts, and delicacies. As a bonus, part is this market is located in Montreal’s Little Italy Neighborhood, so if you couldn’t satisfy your hunger at the market, there are numerous mouth watering options within a short stroll.

Vieux Port: No trip to Montreal is complete without an afternoon or evening spent wandering in and out of the quaint shops that line the cobbled streets of the Vieux Port. Have a meal on a terrace beneath an umbrella. Order crepes, or poutine. Bonus points if you cap the experience with a ride in a French Canadian caleche.

Cirque de Soleil: Did you know that the world famous Cirque got it’s start in Quebec? Montreal has long been home to one of the best of the greatest shows on earth, with acrobatics the likes of which you’ve never seen and artistry that takes your breath away. Cirque de Soleil is a must in Montreal. It still happens under a tent in its home town. You’ll want to book your tickets ahead of time if you can. This spring into summer the show on offer is Luzia, a waking dream of Mexico.

Canada is farther north, so be prepared for unpredictable — and chilly — weather, even in summer. Your best bet is to pack layers, so you can add them, or strip them off, depending on your temperature and the day’s weather.

For a Canadian summer trip, here’s your packing list:

If you’re hankering for an adventure to foreign lands, but want to skip the 8+ hour flight across the Atlantic, check out these three great Canadian cities: Niagara Falls, Toronto, and Montreal. Summer is a fantastic time to visit and explore the bilingual magic of eastern Canada.