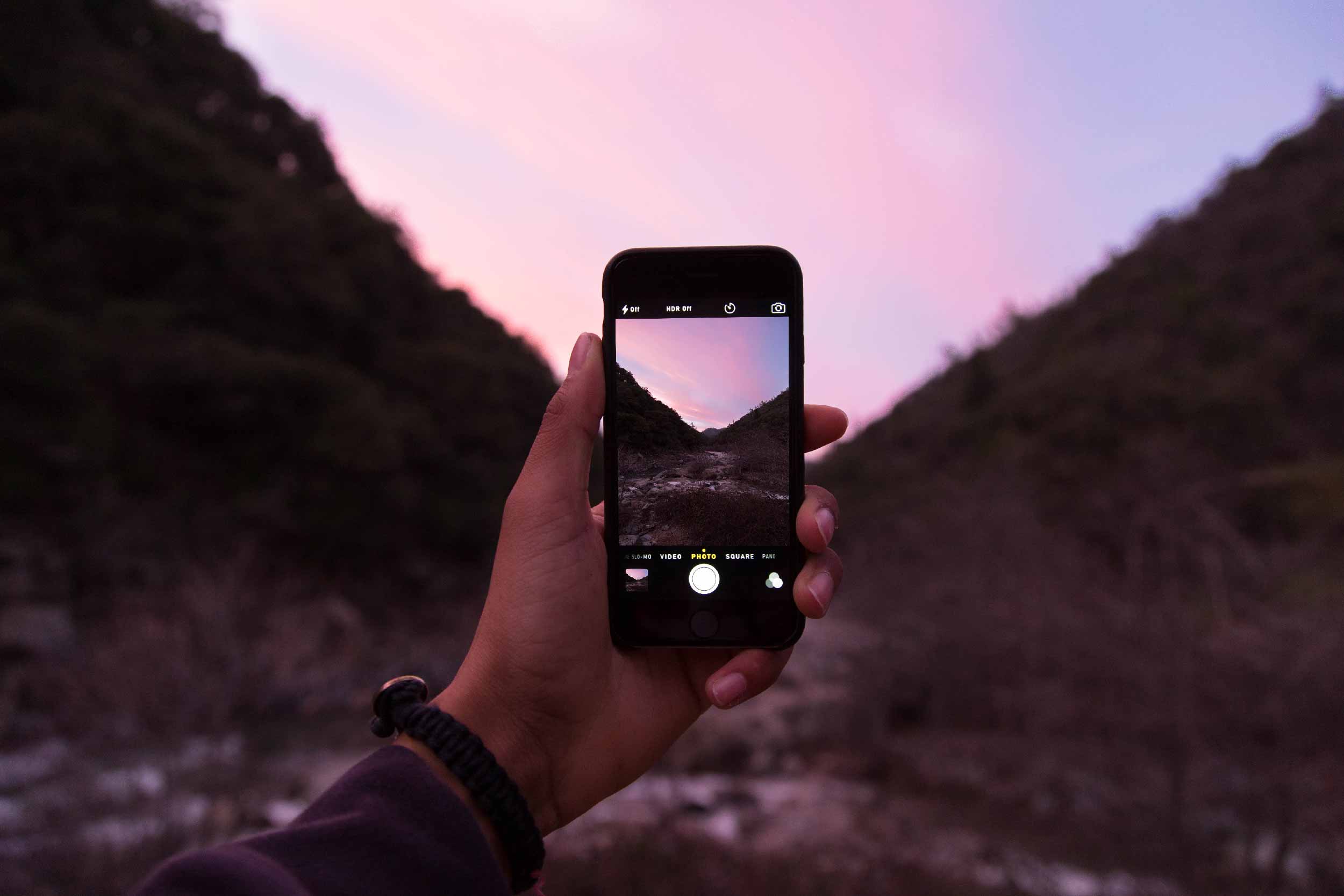 Everyone from digital nomads running six-figure businesses, to college students Snapchatting on Spring Break—today’s modern travelers use smartphones for everything.

Traveling with a phone that works means you can connect with friends and family, record and post quality video, stay on top of emails, write blog posts, sketch online, drop pins of your favorite hidden spots, and book travel, flights, hotels and AirBnB’s, just to name a few things.

Say hello to the grid.

Seriously, the days of traveling off the grid are fading fast, and if your phone doesn’t work, you’re gonna be a few steps behind. Don’t pay 600 baht for a “cappuccino” at the bar to siphon the sluggish wi-fi so you can book a night at an overcrowded hostel in Bangkok.

Get a Southeast Asian cell phone (and an international cell phone plan) that works anywhere from Singapore to Burma, and everywhere in between. Make plans, run your business, or stay in touch from anywhere.

The best international cell phone plan might be the one you already have. If you’re covered for the country you’re traveling to, it will save you a lot of hassle to simply keep your current provider. Seriously.

I’ve been a fan of T-mobile’s Simple Choice International Plan since I started traveling full-time for work. It’s the same flat rate as what you pay in the States ($50/month), and covers Singapore, Thailand, Cambodia, Vietnam, Indonesia, the Philippines, Hong Kong, and Malaysia. (Laos and Burma/Myanmar are typically less well covered by roaming and international plans but more on that later).

All T-mobile international plans include:

I want to do a full comparison of Verizon, AT&T, and Sprint’s SE Asian international plans, but honestly, they’re all pretty terrible compared to T-Mobile.

AT&T is a distant second to T-Mobile with their International Passport Packages. In addition to your existing monthly bill, you can add 30 days of roaming service in 190 countries for $30, $60, or $120. Sounds good, right? Nope.

Again, that’s money on top of your monthly bill, not instead of, so it’s already expensive, and if you look at the data allowances carefully you’ll see that it’s MB not GB.

For $60—the median option—you get a whopping 300MB of data. That’s nothing if you use your phone for work and barely enough to load web pages, let alone streaming anything. Data overages start at $0.20/MB which is insane if you accidentally hit “update,” or hand the phone to someone that doesn’t know you’re on a strict data diet.

Personal Opinion: This plan is worse than no plan. It lulls you into a false sense of security and could cost hundreds on a long trip.

Verizon charges $10 per day for roaming in SE Asia (on top of your monthly bill). That’s way too much. Your cell phone plan should never cost more than your travel insurance.

The Sprint site wasn’t even working while researching this article. So…

If you forego T-Mobile, and decide to pick up a SIM card in country, there’s one question you need to answer before you go: “Is my phone compatible with the country’s network?”

Every cell phone company on earth uses one of only two cell phone network types—GSM or CDMA. T-Mobile and AT&T for example use GSM. Sprint and Verizon operate on CDMA.

Strangely, every single country in the world—except the U.S., South Korea, and Japan—uses GSM. So if you have Verizon or Sprint, your CDMA phone simply won’t work. You can’t just swap a new SIM card in either. It has to do with the frequency the phone is keyed to.

To further complicate things, even if you’re GSM compatible, your phone still might not work. US and Canadian phones operate on the 850/1900 GSM band, while most other GSM countries use the 900/1800 band. This means you need a quad-band GSM phone.

It sounds more technical than it is. Old school burner phones are often quad-band GSM compatible. Just double check your make and model to be sure. Europe however, you don’t need to do anything; you’re fine.

New U.S. legislation in 2014 means that cell phone companies have to unlock phones when a contract runs out or you pay off your phone. It’s the law now. That new rule is why phone companies got smart and launched those new “free upgrade every year plans”—it keeps unlocked phones off the market, and makes sure you stay loyal with a new leased phone every year.

So, it’s less likely every year that you actually own your phone, or that you can get it easily unlocked. And, unlocking your phone is really important for using any SIM card or network in SE Asia.

If you do have an unlocked, GSM-compatible, phone and you want to give a local SIM card a try, instead of worrying about data overages and roaming fees, here is a country by country rundown of some of the best options:

My brother (a successful computer programmer) has been living and working in Singapore—the international business hub of SE Asia—for the past two years, and he says cell phone providers are a mixed bag:

“Singapore has three cell providers, with no clear leader in terms of coverage or price/features.”

“Most Singapore post and pre-paid plans allow roaming in other SEA countries at a (high) daily rate. For prepaid, you send a code to spend some of your balance and turn on data roaming for a day. But as far as always-available affordable roaming, I don’t think it exists. You can get roaming that covers the main business centers (Singapore, Malaysia, Indonesia, Hong Kong, Macau), but they won’t cover Vietnam, Cambodia, etc.”

His advice for short-term travelers to Singapore:

“For travelers, I think the best is to buy the tourist cards that are available at the airport in each country. I know that in Singapore and Hong Kong they’re available for 1, 3, 5, 7, or 10 days and they usually give you a ton of data at 4G speeds.

In Hong Kong, for example, that was the only option I had since I’m just here for 2 weeks. Fortunately $30 HKD ($3.86 USD) gets me 10 days of unlimited 4G data on China Mobile. I know that every Singaporean operator has a tourist SIM.”

Side note: In Singapore, it’s illegal to sell locked phones. So if you have to pick one up, you’ll be able to use it in a lot of other places.

Thailand is a diverse country full of big cities like Bangkok and remote islands. Don’t expect your plan to work everywhere, since signal strength is the most common gripe amongst nomads.

Most long-term nomads use True, since it has the best signal (especially in Bangkok). AIS is a close second—it’s 1/3 the price for daily plans with decent data packages available—but if you have steady wifi via a work space or cafe, True is the clear winner with 4G plans that start at 300 baht/month ($9 US).

Cambodia’s infrastructure isn’t great, but their cell service is quickly catching up to international standards.

Metfone is Cambodia’s largest provider (it bought out popular Beeline last year), followed by Mobitel/Cellcard. Beeline was renowned for its English tech support and tourist SIM package, as well as low data rates, so Metfone is the most likely option for short-term travelers and expats alike.

Cell service in Vietnam is limited to three providers and requires registration to activate a new SIM card. 3G service is widely available in most areas, and can be as cheap as VND 50,000 (around USD 2.5) for 1 GB data download and upload. Pre-paid SIM cards typically expire after 30 days, so if you’ve managed to arrange a longer visa, take that into account.

You can buy a SIM card just about anywhere in Vietnam and get set up in a few minutes.

Scam Alert: Don’t worry about websites that promise to send you a SIM card before you leave home—it’s a scam. Cheap cards are easy to buy in country.

Update: T-Mobile Simple Choice International DOES NOT provide roaming service in Vietnam. Always check that your country of choice is actually covered. Here’s a link with more info: https://support.t-mobile.com/docs/DOC-3226.

Indonesia has a pretty competitive cell provider marketplace, so pre-paid rates are affordable. However, the going rate for 10GB of data on Indosat (the current deluxe package) is 130,000 Rp/month ($9.50 US), so ponying up the cash for a monthly plan might actually be the way to go.

Bonus: A lot of plans are similar to the US with features like free Spotify streaming

Malaysia is another country with a lot of customizable plans. Maxis offers an unlimited talk and text plan (in country) with 5GB of 4G data for 48RM/month ($12US). It even includes free music and video streaming.

Prepaid plans are available, but it’s like going back to the 90’s with per minute and per SMS rates. Honestly, per SMS rates could add up quickly (we forget how many inane texts we send back and forth). Best to just commit to a monthly plan.

4G coverage in these countries can be spotty, and roaming on either US international plans or even other SE Asian providers is typically out of network. If you plan on spending any significant time in these countries, pick up a local phone and SIM card.

The right plan can turn your smartphone into a Swiss army knife. The wrong one can cost you hundreds of dollars. Choose wisely.