United Airlines’ recent announcement that they’ll be releasing a new no-frills airfare in January — in combination with several other changes — may have upset travelers who were following the news. However, an extra charge for your carry on bag isn’t the only update to be aware of. This is just one part of United CEO, Oscar Munoz’s, larger plan to increase both profits and customer appeal.

How will United’s new changes impact everyday travelers? What should we expect to see? How will these new rules change the way we travel? Read on for the inside scoop. 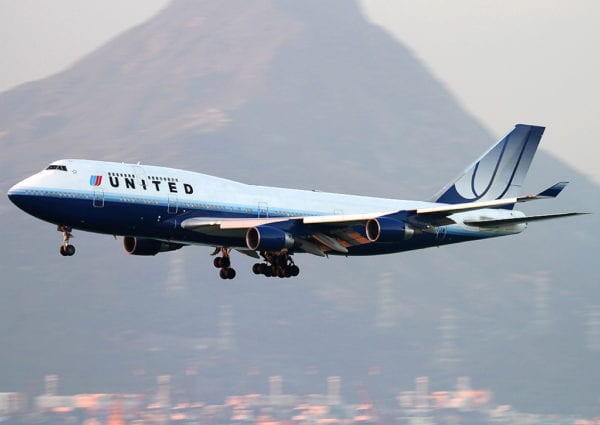 These changes are intended to help United provide an even lower and more competitive price to budget travelers — particularly on routes where they’re losing customers to budget airlines like Spirit Air and Frontier. United will start to roll these changes out in January, for spring 2017 flights. Available on select routes at first, United does plan to expand the option across their domestic flights.

Though the rules for basic economy fares may seem restrictive at first, these changes could be advantageous to those of us who typically fly with only one carry on already.

As it stands, United will be dropping fares to stay competitive but attempting to make up the profit by charging for things that are currently included in the price of a ticket. Therefore, if you pack light you’ll end up only paying for the price of the space you take up and will save money on your airfare.

Not to mention, less weight = less fuel. What started as an business play might also end up being a positive for our environment.

What Fits Under the Seat?

Under the basic economy fare, United will allow you to bring on one personal item:

“You’re allowed to bring a small personal item on board, such as a shoulder bag, backpack, laptop bag or other small item that is 9 inches x 10 inches x 17 inches (22 cm x 25 cm x 43 cm) or less. Full-size carry-on bags are not allowed unless you’re a Premier member, a primary cardmember of a qualifying MileagePlus credit card, or a Star Alliance Gold member. Basic Economy fares have the same checked baggage policies as regular Economy tickets.”

This pretty much rules out any roller bags, which generally don’t fit under seats well. However, backpacks and small duffel bags will be okay. Happily, the Outbreaker duffle fits the new dimensions perfectly, maximizing your allowable space under United’s new rules. Pop the flat packing daypack into your duffle and you’ll have plenty of carrying capacity both on the plane and when you arrive and want to get out on the town.

Although the Tortuga V2 and Outbreaker 45, bags both fit under the seat in front (our editor, Jenn, tested and confirmed this on a very small commuter jet recently), they exceed the new “personal item” dimensions. The Outbreaker 35, however, fits the most comfortably under the seat, and the dimensions of the Outbreaker 35 are just 3 inches longer than the stated United policy. Whether or not they are flexible, or get out the tape measure at every gate, remains to be seen. The Outbreaker duffle, however, is perfect; it’s your new go-to bag for economy tickets on budget airlines. Similarly, backpacks from other brands that are smaller than 35L should be fine.

If you really want to challenge yourself, try packing everything in a daybag. Not a light packer yet? Maybe this will be the incentive to improve your packing skills.

Not-So-Great News for Those with a Seat Preference

Personally, it’s the lack of seat selection that bugs me the most. On a long flight, I want to be able to sit next to my partner (he’s the best travel pillow out there) and — like any sane person — I don’t want to get stuck in the middle. So, the lack of advanced seating choice kind of sucks.

However, United’s rule specifies that you will be able to get a seat assignment at check-in (they haven’t gone to full-out RyanAir level yet). Assuming that this applies to mobile check-in on United’s mobile app — which really just means being on top of the 24-hour check-in notice, it could work out fine.

United Airlines’ Planes are Changing Too

One of the less talked about components of United’s new business plan is that they’ll be making some changes to the planes as well.

Besides saying goodbye to free legroom, the seat-back entertainment change is the one most likely to require forward planning. “Not every flight has personal device entertainment or in-seat charging. Passengers don’t know in advance to charge their phones and be prepared for this,” said one United flight attendant I spoke with.

So, how would you know when to bring your tablet and an extra battery pack? “The best way to find out if your United flight has in-seat charging or seatback entertainment is to look in the app,” she said.

United’s app isn’t the easiest to navigate, but you’ll find that information like this:

Click on flight status on the home screen. If your reservation doesn’t show up, you can enter the flight number to navigate to the correct page instead. 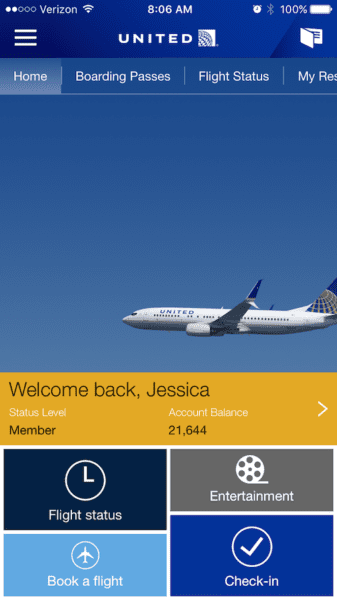 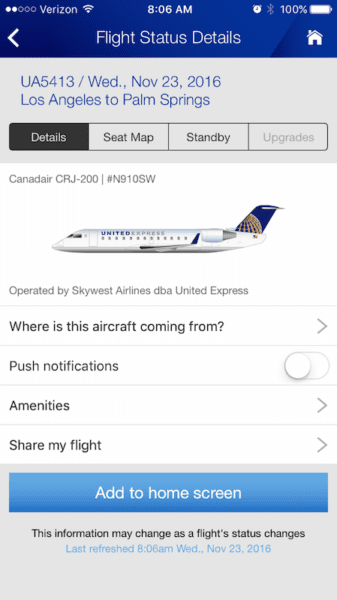 Look at entertainment and wifi and in-seat power. You’ll see something like the screenshots below (the top flight has no power or entertainment. The one on the bottom has some of these amenities): 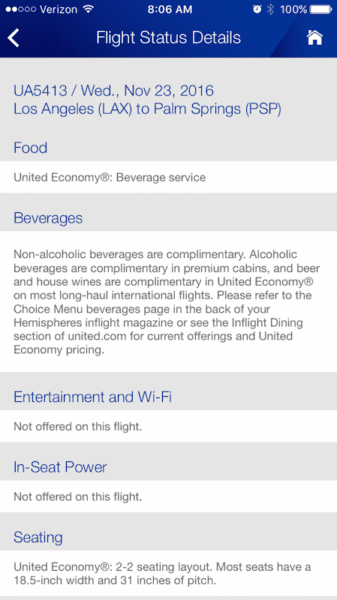 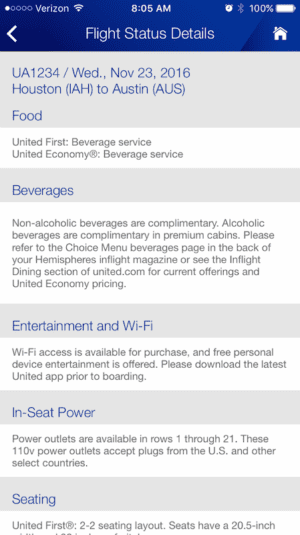 United has also mentioned that they’ll be expanding their services domestically. Ideally, they’d add more routes, have a bigger share of large airport hubs, and schedule takeoffs better to accommodate for connecting flights. Given United’s track record for cancellations and delays, I’m not going to hold my breath on this one, but it would definitely be a great thing to see happen.

This is Likely Going to Become an Industry-Wide Trend

Airlines have a habit of copying each other. Just as United, Delta, and other legacy airline carriers followed American Airlines’ 2008 decision to charge for checked bags, it looks like we’ll soon see carry on baggage fees and basic economy fares on all airlines. Delta rolled out their option 4 years ago and American Airlines is rumored to launch one later this year.

Although we did see snacks come back to economy on United (did anyone else not notice that, by the way?), it’s unlikely this fee will go away anytime soon.

United’s new, no-frills, basic economy fare is just one part of a larger shift in how Oscar Munoz plans to run the legacy airline in the future. For those of us planning to fly with the airline in 2017 and beyond, these changes mean: