I’d bet you don’t hear this much, but I actually love packing. Not only does it mean a trip is quick approaching, but I’ve always enjoyed the challenge of trying to see just how light I can get my bag.

I mean, I’m no Rolf Potts, but over the years I’ve gradually dwindled my packing list down to the most minimalist packing list possible. Recently, I spent 10 days in Mexico with nothing but one daypack and a small purse — which was, apparently, light enough to raise suspicion at customs.

But packing light is subjective, and can look different from person to person, and trip to trip. Even if you’re only packing a carry on, you could end up with anything from a day pack to a larger 40 liter bag. So, rather than talking about minimalist packing, I’ll be demonstrating just how light “light packing” can be by comparing three different packing lists with three different bags — the Tortuga, Tortuga Air, and Tortuga Daypack — for the same trip.

The Trip: 3 Weeks in Southeast Asia

Packing for a weekend getaway would be too easy, right? Which is why, for this experiment, I’ll be using an upcoming three-week trip to Bangkok, Sri Lanka, and Taiwan as my example. Although the climate and temperature will stay pretty consistent throughout the trip (which simplifies a few things), I’ll still need to prepare for:

For each sample packing list, I’ll progressively be getting lighter, but also using a smaller bag: 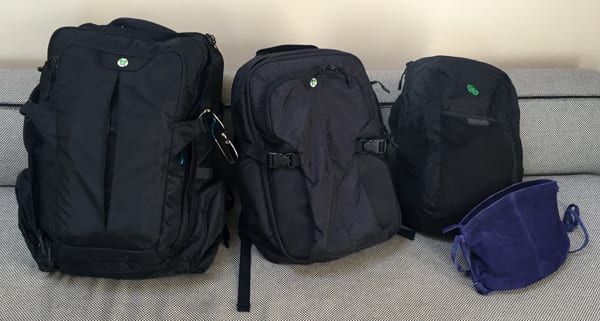 My first go at a light bag for this trip is what most people would consider pretty darned light. This packing list will be the “original” or control list for this little minimalist packing experiment. Using the Tortuga, which fits carry-on dimensions perfectly, I packed the following:

I decided to wear the flats, leggings, dress, scarf, and sweater on the plane (I personally hate wearing sneakers while traveling, but packing light allows me to just toss them in my bag).

My pack was a backpack that was easy to carry and fit easily as a carry-on during flights, but also allowed me to be prepared for most of the situations I thought I’d be encountering. Here’s what it looked like all together: 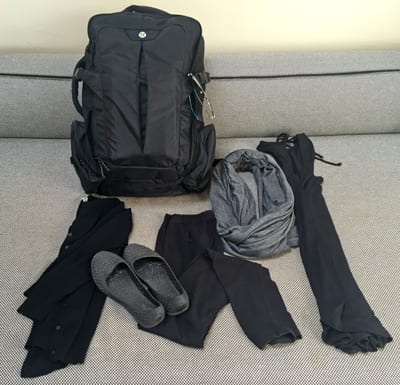 I thought I did a pretty good job at just packing the basics on our first packing list, but after re-examining the list and thinking about what I was and wasn’t willing to travel without, I saw some opportunities to go even lighter. In the second version of this list, I swapped out the Tortuga for the Tortuga Air, and took out a bunch of redundant items from my bag:

On the plane, I’d now be wearing a t-shirt, flats, the sarong as a scarf, my sweatshirt, and leggings.

By taking out all of these items, I was able to pack even lighter and more minimally, travel with a lighter bag, and ultimately be even closer to the most minimalist packing list for my trip… 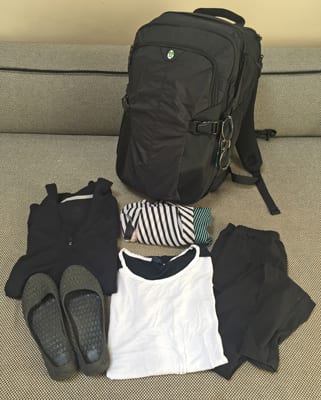 Still, I wanted to see if I could get everything into just a daypack. Though I’ve done it several times for shorter trips, I still had quite a lot of stuff, and I wasn’t sure if it would all fit — even if I “cheated” by bringing a small cross-body purse (which always makes it easier to keep track of small valuables and get my passport, phone, or plane ticket out easier).

In order to get ultra minimalist, I knew I would have to get rid of some things, but also make a few others even smaller.

First, I removed even more items:

Then, I miniaturized a few others items, or swapped them out for more compact versions: 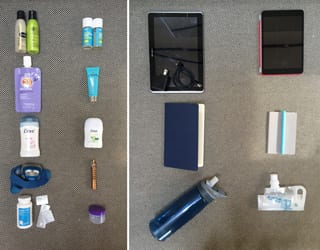 Furthermore, since I would be packing all of this in the daypack there was no need to pack the daypack itself. I’d also plan on wearing the sweater, leggings, a t-shirt, and sarong on the plane. However, when I travel with only a daypack, I like to have a small cross-body purse in addition so that I can easily access my passport, phone, and pen while traveling.

The results? An ultra-light packing list that would — thanks to a bit of crafty engineering — get me through three weeks traveling in tropical Southeast Asia. Yes, it would mean doing more laundry, but it would also mean more freedom and lightness throughout my trip. 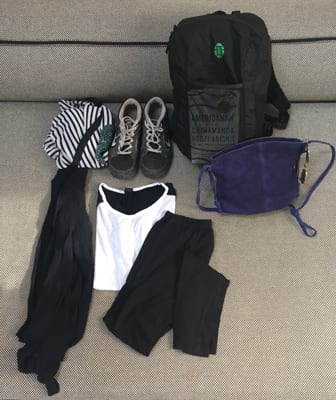 Packing light looks different to different people and can vary from trip to trip. Using three different bags, all of which are carry-ons, we demonstrated how to pack light, lighter, and ultra-light. When every small corner of space counts, you can get your bag from light to ultra light by:

So go ahead, grab your daypack or Tortuga Air and challenge yourself to go even smaller than usual on your next trip. With a little creativity and planning, you’ll be able to take your bag from light packing to ultra light.